I had plans this weekend and Twitter led me astray from them briefly, but I discovered a new cover of an old favorite in the process.

It all started when I woke up on Saturday morning, checked in with Twitter, and noticed that Cody had twittered: “Departing to Kansas for the weekend. If Magnetic Fields changed song lyrics to ‘Baby I was born on a PLANE’ it would apply to my recent life.” I absolutely love Magnetic Fields, and “Born on a Train” (available on iTunes) is one of my favorites, so Cody’s twitter had me puttering around the house on Saturday morning singing this amazing song:

Some roads are only seen at night
Ghost roads — nothing but neon signs.
But some nights the neon gas gets free
and turns into walking dead like me

And I’ve been making promises I know I’ll never keep
One of these days I’m gonna leave you in your sleep
I’ll have to go when the whistle blows, the whistle knows my name
Baby, I was born on a train. 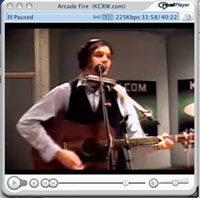 Feeling inspired, I sat down to play the song (I learned to play it on guitar long ago — it’s easy, like most Magnetic Fields songs), but I couldn’t remember past the first verse, so I did a search and near the top of the results was a link to the Arcade Fire lyrics. Arcade Fire?! I had no idea.

Now, I’m not totally sold on this whole Arcade Fire thing (that’s another post entirely), but when a band covers one of my favorite Magnetic Fields songs, it goes a long way towards earning my musical respect. I had to find their cover, and it only took a search or two to locate it. It was a live version done on KCRW’s Morning Becomes Electic on January 17, 2005. You can watch the whole performance (“Born on a Train” begins at the 29:40 mark — open this URL directly in RealPlayer instead of the built-in player if you want to see the time) or you can go straight to it on YouTube.

One thought on “Born on a train: Twitter and musical serendipity”