My father Phillip G. Dickerson Sr. passed away at age 77 around 5am Thursday, May 21 in my hometown of Greenville, NC. The obituary is here. I was with him at his bedside in his final days and I know he knows how much I loved him. The family has established the Phillip G. Dickerson Sr. Memorial Scholarship in the School of Engineering at NC State to honor his memory (more on that and how to contribute here). 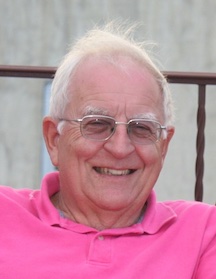 alive. I wrote one for Father’s Day in 2012 and I shared it with him (and the world) then. If you want to know what a great man my dad was, I encourage you to read it. I only feel what I said about him then more deeply now that he is gone. I’ve been talking with friends and family non-stop since he passed away and the themes from that post are only magnified in this moment. He was a good man. We didn’t always see eye-to-eye on everything but we adored each other and there was never any question about that. I am grateful that I shared that tribute with him when he was alive. He lived very modestly and didn’t seek the limelight but I know he enjoyed the attention when we did special things for him.

Since I wrote that living tribute, I also had the opportunity to fund basketball and pickleball courts in a county park he helped bring into existence as the County Engineer of Pitt County, NC (a job he had for 30+ years). We named it the Phillip G. Dickerson Sr. Courts in his honor and had a ceremony for his family and friends. We gave speeches while he sat in the front row. You can hear my brother and me talk about my dad in this YouTube video (starting at 10:34), including some playful digs at the UNC Tarheels, a team my dad loved to hate as an NC State graduate. My dad and I bonded regularly over basketball so it was more special than you can imagine to name a basketball court after him. I’m glad we did that while he was still alive and every time a father and son shoot around there like we did when I was a kid, they will see my dad’s name on the sign.

Even though I’m at peace with how I expressed love and appreciation to my dad, the finality of death is startling. In life, we often say “this isn’t life or death” about situations and being in a situation that is actually life or death is wrenching. In a series of excruciating decisions made even more excruciating from all of the considerations of the coronavirus epidemic, we decided to put my father in hospice care at home the prior weekend. After being safe and healthy with my family in Brooklyn, I made the decision to leave my two-month-long quarantine in Brooklyn Monday morning and was able to be with him starting Monday evening. A generous lifelong friend drove me all the way from Brooklyn to my dad’s doorstep in Greenville, NC and I’m not sure I will ever be more grateful for any gesture in my life.

(Warning: if discussions of death and dying are difficult for you, I encourage you not to read further.)

I really hesitated to put in words what I’m about to write about the most difficult parts of the experience but after speaking with friends and family, I found that my experience is common and there is even a term for some of what I experienced: “terminal restlessness.” No one seems to talk about it, though, until after you’ve been through it. I wish I had known what I was about to deal with when I came down on Monday, so I’m writing about this in the hopes that someone going through a similarly grueling experience will find this post and feel comforted that they are not alone. Writing this also helps me process my own experience.

If you’ve never been through having a loved one in hospice, it’s difficult to describe the experience. On the most basic level, being in hospice means that the family cares for the loved one at home making sure the person is as comfortable as possible in the final days of life, with the generous support of a team of nurses, social workers, and clergy (and they are incredibly generous). They visit, advise, support, and train but the care is nearly completely administered by the family. One of my main jobs was giving my dad the medicine he needed to have a peaceful transition. I’ve had what some would consider “important” jobs in my life but none was as important as my job as nurse for my dad in his final days (along with my dear brother). Nothing comes close.

On his second to last night with us, my father talked all night. He was normally a quiet man who spoke in simple language. That night he was having visions, mentioning names of his brothers who had passed before him, talking about going places. I sat by the bed with one of the caregivers we had brought on to help, trying to make sense of what my father was saying. Everything was in the present tense as if it was happening right then, not 2:30am in the morning. He talked about shingles and roofs and nails. He told me to go get the nails from the truck. I said, “Daddy, are you talking about the summer when we put shingles on the roof?” He said, “Yes” and seemed to calm a bit. He started talking about pigs and goats and the barn and I said, “Daddy, are you talking about when you were a boy growing up on the farm?” and again he calmed a bit and nodded weakly. I felt like portals were opening and closing, then opening again and closing again. I couldn’t see what he was seeing myself but I was sure he was seeing these things.

The most persistent image was a train. “Get on the train!” he said emphatically, raising his voice as much as his weak body would allow. “The train is leaving! Hurry, hurry, hurry!” He said he was on the train with his brother Fred, who had passed away in 2009. He said, “You can lay me down by the tracks on the ground if you have to, I have to go!” I struggled to make sense of what he was saying. I will never know for sure what he was seeing in those moments but after a few minutes of puzzling over his vision, I felt a force channel a song through my body. I began singing quietly to myself through tears:

This train is bound for glory, this train,

This train is bound for glory, this train,

This train is bound for glory,

Don’t ride nothin’ but the righteous and holy

This train is bound for glory, this train.

I will never hear that song the same way again.** It has been on a continuous loop in my head ever since as I have been trying to process the essentially unknowable that he was expressing in simple words, thinking about how insufficient our earthly language is to express such a profound transition. Looking back, I think he was starting his final journey in those moments.

The rest of the night and next morning into the afternoon, it felt like we were wrestling with Death. No one tells you how physical this experience is. Much of it I would rather keep private but the reality of “terminal restlessness” is more intense than any experience I’ve had in my life, by orders of magnitude. I thought my Apple Watch was broken. I had only been the few dozen feet between the kitchen, the couch in the living room, and my father’s bedroom but it said I had walked 2.5 miles.

The talk of trains stopped and he became less coherent and stopped talking altogether by afternoon the next day. His breathing became increasingly labored. In his final 36 hours, working under guidance of the hospice nurses (who we called at all hours), we switched to a new course of medications to maximize his comfort and minimize his suffering. Every two hours I would go to the kitchen to mix morphine and Ativan in a measuring spoon from his cupboard. Once the Ativan pill fully dissolved into the morphine, I drew the mixture into a syringe and went into my dad’s bedroom.

At his bedside, I would hold his hand and gently kiss his forehead as I gently dripped the mixture of medicines into his mouth. I would say, “It’s me, Daddy. It’s Chad. I’m here to give you some medicine to make you feel better.” Sometimes he would squeeze my hand in recognition and other times I could feel him relax a little when he knew I was there. I rubbed his back, hugged him, and stroked his hair. I wondered aloud after he passed if he actually knew it was me there but then learned that hearing is likely the last sense to go when someone is dying, so I’m more certain he knew I was there. I felt calm in those moments of helping him but wept every time when I left the room.

My brother and I had been setting our alarms to alternately check on him every two hours and administer his medicine throughout the night and when my turn to check on him came that morning, he was no longer breathing. I was alone with him in that moment. I felt a strange sense of calm as I embraced his now-lifeless body, kissed him on the forehead once more, stroked his hair, and stepped out of the room to wake my brother and let him know. My father’s suffering was over. Losing a father is difficult under any circumstances and this was also my first close encounter with death. I am still processing it, and will be for some time. I know I will never be the same.

I had set a daily alarm for 6:58pm in the early days of my quarantine in New York City so that we would be ready to open our windows at 7pm to cheer for the health care workers every night with the rest of the city until the coronavirus crisis was over. On Thursday night — the first night after my father left us — I was on the phone with my family back in Brooklyn when the alarm went off. I missed New York but was where I needed to be. I asked them to cheer this time for the people who took care of my dad. I can’t express my gratitude enough to them but I like to think that on that one night, the greatest city in the world was cheering for them, too.