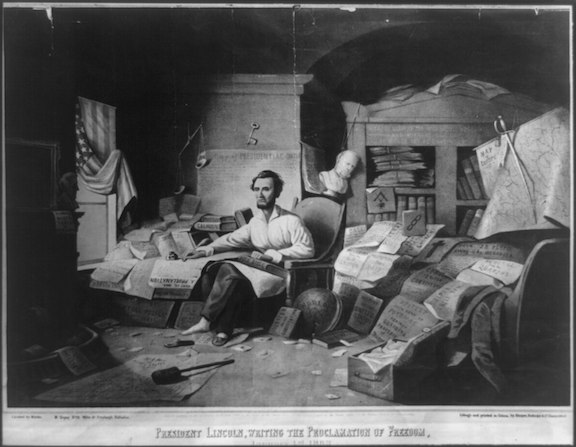 One of my favorite talks is “Solitude and Leadership” by William Deresiewicz in a lecture that was delivered at the United States Military Academy at West Point in October 2009. It’s about the critical and often overlooked link between solitude and leadership. We tend to think of leaders when they are “in the arena” or practicing “management by walking around” but not as much about the necessity for leaders to spend time sitting alone, thinking and reflecting.

The transcript of the talk is worth reading in its entirety but I pulled a few quotes below to give you a flavor:

My title must seem like a contradiction. What can solitude have to do with leadership? Solitude means being alone, and leadership necessitates the presence of others—the people you’re leading. When we think about leadership in American history we are likely to think of Washington, at the head of an army, or Lincoln, at the head of a nation, or King, at the head of a movement—people with multitudes behind them, looking to them for direction. And when we think of solitude, we are apt to think of Thoreau, a man alone in the woods, keeping a journal and communing with nature in silence.

Leadership is what you are here to learn—the qualities of character and mind that will make you fit to command a platoon, and beyond that, perhaps, a company, a battalion, or, if you leave the military, a corporation, a foundation, a department of government. Solitude is what you have the least of here, especially as plebes. You don’t even have privacy, the opportunity simply to be physically alone, never mind solitude, the ability to be alone with your thoughts. And yet I submit to you that solitude is one of the most important necessities of true leadership. This lecture will be an attempt to explain why.

We have a crisis of leadership in America because our overwhelming power and wealth, earned under earlier generations of leaders, made us complacent, and for too long we have been training leaders who only know how to keep the routine going. Who can answer questions, but don’t know how to ask them. Who can fulfill goals, but don’t know how to set them. Who think about how to get things done, but not whether they’re worth doing in the first place. What we have now are the greatest technocrats the world has ever seen, people who have been trained to be incredibly good at one specific thing, but who have no interest in anything beyond their area of exper­tise. What we don’t have are leaders.

Thinking means concentrating on one thing long enough to develop an idea about it. Not learning other people’s ideas, or memorizing a body of information, however much those may sometimes be useful. Developing your own ideas. In short, thinking for yourself. You simply cannot do that in bursts of 20 seconds at a time, constantly interrupted by Facebook messages or Twitter tweets, or fiddling with your iPod, or watching something on YouTube.

You can just as easily consider this lecture to be about concentration as about solitude. Think about what the word means. It means gathering yourself together into a single point rather than letting yourself be dispersed everywhere into a cloud of electronic and social input. It seems to me that Facebook and Twitter and YouTube—and just so you don’t think this is a generational thing, TV and radio and magazines and even newspapers, too—are all ultimately just an elaborate excuse to run away from yourself. To avoid the difficult and troubling questions that being human throws in your way. Am I doing the right thing with my life? Do I believe the things I was taught as a child? What do the words I live by—words like duty, honor, and country—really mean? Am I happy?

it’s perfectly natural to have doubts, or questions, or even just difficulties. The question is, what do you do with them? Do you suppress them, do you distract yourself from them, do you pretend they don’t exist? Or do you confront them directly, honestly, courageously? If you decide to do so, you will find that the answers to these dilemmas are not to be found on Twitter or Comedy Central or even in The New York Times. They can only be found within—without distractions, without peer pressure, in solitude.

Thinking for yourself means finding yourself, finding your own reality. Here’s the other problem with Facebook and Twitter and even The New York Times. When you expose yourself to those things, especially in the constant way that people do now—older people as well as younger people—you are continuously bombarding yourself with a stream of other people’s thoughts. You are marinating yourself in the conventional wisdom. In other people’s reality: for others, not for yourself. You are creating a cacophony in which it is impossible to hear your own voice, whether it’s yourself you’re thinking about or anything else. That’s what Emerson meant when he said that “he who should inspire and lead his race must be defended from travelling with the souls of other men, from living, breathing, reading, and writing in the daily, time-worn yoke of their opinions.” Notice that he uses the word lead. Leadership means finding a new direction, not simply putting yourself at the front of the herd that’s heading toward the cliff.

I started by noting that solitude and leadership would seem to be contradictory things. But it seems to me that solitude is the very essence of leadership. The position of the leader is ultimately an intensely solitary, even intensely lonely one. However many people you may consult, you are the one who has to make the hard decisions. And at such moments, all you really have is yourself.

Again, here’s the link to the full speech.